What is soft tissue damage and how is it treated? 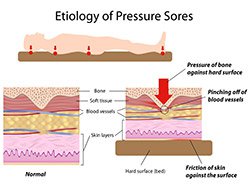 Soft tissue damage refers to damage done to the muscles, ligaments, and tendons throughout the body. Often referred to as sprains, strains, contusions and tendonitis, soft tissue damage is usually caused by a traumatic event such as a slip and fall or a traffic accident. It can result in swelling, bruising, and loss of function. Immediately after an injury, the area affected by soft tissue damage should be protected, rested from any strenuous activity, kept cool with ice to regulate swelling, compressed and elevated. If pain continues after 72 hours, it is likely that the injury is more than a simple sprain or strain. When the soft tissue is inflamed for a long period of time it could result in serious, long-term damage.

When soft tissue damage exists in the back and the spinal column is compressed, it may result in what is commonly referred to as a pinched nerve. Each vertebrae is separated by a gel filled sac that acts as a cushion between the bones. When the muscles surrounding and supporting the spine are inflamed, it pushes the bones together, squeezing the sac and causing it to bulge, called a bulging disc. In more serious cases, the sac actually ruptures. This is called a herniated disc. Besides being incredibly painful, these conditions can result in weakness or numbness in the extremities, known as radiculopathy.

MRI can confirm the existence of a bulging or herniated disc. Treatment varies depending on the severity of the case. For some, physical therapy and chiropractic manipulation will be enough to heal the damaged area. This is considered conservative treatment. There is the possibility that an epidural injection to the affected area could help reduce inflammation and give the injury an opportunity to heal. If nothing else is successful, spinal fusion or decompression may be an option to reduce pain. A doctor should be consulted before engaging in any sort of treatment.