Defamation - Breaking it Down 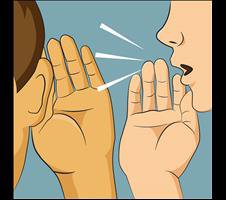 Defamation has two basic forms: “libel,” the written form, and “slander,” the spoken form. To establish either type, certain elements must be present. The false statement must be "published" and the false statement must result in injury. In terms of defamation accusations, “published” does not mean publication in a newspaper, magazine, or book— a statement is considered to be "published" when another party sees or hears it. In this context, speaking loudly enough to be heard by a third party may be considered "publication." False statements can also be made not only through spoken or written words, but by presentation of images or symbols.

There are, however, exceptions that make individuals immune to liability. These include absolute and qualified "privilege" and apply in special situations, such as in communications between spouses, in governmental proceedings, or in statements made in self-defense.

Furthermore, one cannot recover damages for defamation if there has not been resulting injury or damage to the reputation of the other party. Examples of damage include loss of employment, harassment, and loss of business contacts or friends. It should be noted that public officials are less likely to be shielded from defamatory content. Beyond proving the above-stated elements, a public official may be required to demonstrate the existence of “actual malice.” "Actual malice" is generally defined as making a statement with knowledge that it was not truthful, or with “reckless disregard” for the honesty of the declaration.

The discovery process in defamation cases may be lengthy because the jury must analyze all of the circumstantial evidence surrounding the statement in question. Factors to be considered may consist of the place where the declaration was made, the relationship of the accuser to the accused, and the reasons or motives behind the assertion. Because of the complexities involved in defamation cases, expert advice from a licensed attorney is essential.